As teams frantically searched areas of Southern California smothered by rivers of mud and boulders, officials on Thursday increased the size of the evacuation zones.

The immediate areas where at least 17 people were killed by Monday’s mudslides are under mandatory evacuation, Santa Barbara Sheriff Bill Brown said.
“We know that this a terribly inconvenient development but it is also incredibly necessary,” Brown said to residents.
The number of people missing in and around the oceanside community of Montecito was in flux Thursday. At an afternoon news conference Brown said as many as 43 people could be considered missing.
Authorities have not confirmed that many people are unaccounted for, he said, but are looking into reports from phone calls, social media and message boards.
“It doesn’t mean that they (the 43 people) are all actively missing,” he said.
Thursday morning the total was reported as 48 then revised to eight due to a “clerical error,” according to the sheriff’s office.
Brown said he still had hopes people would be found alive as the search moved into its third day.
“We certainly are searching for a miracle right now,” he said. 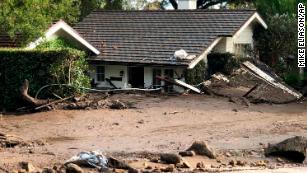 • Victims list: Officials have released the names of the 17 people killed. The victims ranged from 3 years old to 89 years old.
• Deadly storm: All the deaths were reported in Santa Barbara County, authorities said. An additional 28 people were injured in the county.
• Destruction: At least 65 homes and 462 other residences were damages in Santa Barbara County, spokeswoman Susan Klein-Rothschild said Thursday. Eight commercial buildings were destroyed, and 20 were damaged.
• Search: Crews had completed a primary search of 75% of the debris field.
• Water: A boil water notice is in place for Montecito and Summerland.
• Weather conditions: No rain is forecast for the area over the next seven days. High temperatures are expected to be in the upper 60s to mid 70s from Thursday through the weekend.
• Road closed: Sections of US 101, a major thoroughfare connecting Northern and Southern California, are closed until Monday.

Anxious residents have been awaiting word on their loved ones. On Thursday, Brown said the searches may take weeks.
“This entire area is a very active rescue and recovery and repair zone right now,” he said in announcing the new mandatory evacuation boundaries.
READ THE FULL STORY VIA CNN.