SEOUL (RNS) — On April 21, 2008, what Chen Mo had been fearing finally happened: He was arrested by the local police in his home province of Henan in central China.

Chen, then 25, was tortured and beaten, he said.

Chen’s crime was belonging to the Church of Almighty God, a Chinese Christian religious movement that China’s government has labeled an “evil cult” and a threat to state security.

After being jailed for five years, he fled to South Korea. Now he — like hundreds of other members of his church in exile here — lives in terror of being deported back to China, where it is likely he will be jailed again.

“We want to go back,” he said. “But we have to wait until China has freedom of religion.”

Chen and other church members held a press conference in Seoul on March 18 that coincided with the release of a report that claims that thousands of CAG members have been arrested in China. 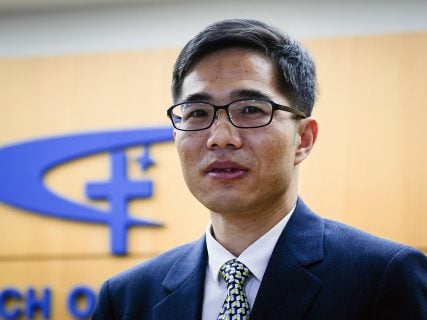 Chen Mo, a member of the Church of Almighty God, a new Chinese Christian religion, at his church in Seoul, South Korea, on March 20, 2019. He fled to South Korea in 2016 and is in limbo awaiting asylum status. RNS photo by Thomas Maresca

The church, which started in 1991, has an estimated four million members in China. Its followers believe that Jesus Christ has returned and is incarnated as a Chinese woman: She is not publicly named by the church, but scholars identify her as Yang Xiangbin, a woman born in 1973 in Northwestern China and now believed to be living in the United States.

Their religious practice centers around a minimalist style of worship that includes reading from The Word Appears in the Flesh, which they believe to be the Word of God, singing hymns, sharing testimonies and hearing sermons.

They do not practice any of the traditional Christian sacraments, believing that those belong to a previous era of Christianity.

“I lost the best years of my youth there,” he said.

Church member Mo Xiufeng is currently serving a nine-year sentence in prison, according to the Tom Lantos Human Rights Commission, a bipartisan group made up of members of the U.S. House of Representatives.

According to a March 20 report published by the church, more than 11,000 CAG members were arrested in China in 2018 alone — and 20 died as a result of mistreatment.

The report is self-published, and figures are impossible to verify. But Massimo Introvigne, founding director of the Italy-based Center for Studies on New Religions, said he found the numbers credible based on Chinese media accounts.

“Chinese media report almost weekly that hundreds of members of the Church have been arrested in one province or another,” he said.

The US State Department’s Human Rights Report 2018, released in March, singled out China for its extreme human rights violations and noted the “systematic torture in custody” of members of the Church of Almighty God. 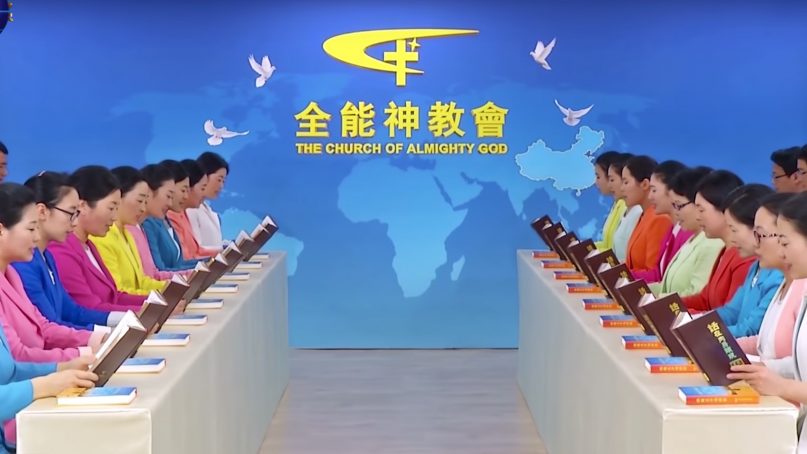 A promotional video from The Church of Almighty God shows a group of people reading together. Video screenshot

“The Church of Almighty God is often referred to by the Chinese Communist Party as the ‘new Falun Gong,’” said Introvigne, who has written a book on the church that will be published by Oxford University Press.

Introvigne said the church does not follow the state-sanctioned Three-Self Patriotic Movement or China Christian Council. He also said that it has expanded to a significant size from its origins among the small “house churches” of the 1980s.

That growth has led to a crackdown.

“’You should not grow’ is the main message to any religious movement in China,” said Introvigne.

After his release from prison, Chen said he stayed in hiding, constantly moving homes until an opportunity to escape came in 2016 when he was able to flee to South Korea’s Jeju Island — a resort destination that offers visa-free tourist entry for mainland Chinese.

But freedom has remained elusive for Chen and nearly 1,000 other asylum seekers from the CAG who have fled to South Korea.

All of them have filed asylum claims, but none of the claims have been approved by the South Korean government.

“They’ve lost everything — houses, families, jobs,” said Rosita Soryte, a former Lithuanian diplomat who is president of the International Observatory of Religious Liberty of Refugees. “They are not full members of society anywhere — here they live in limbo. These people need to find a place to stay because (South) Korea is not giving them asylum, and they cannot go home.”

Church members fear that they will be arrested immediately if they are deported to China.

Many report that their relatives back home remain under constant threat and surveillance and say the Chinese government has continued to monitor and harass them in South Korea.

While Church of Almighty God members have found refuge in some 30 other countries, including the US, Canada, Taiwan, Australia, New Zealand and several EU countries, South Korea has proven particularly resistant to allowing any asylum claims or welcoming any refugees.

The Chinese Church of Almighty God members have not inspired the same public outcry, but officials have not been sympathetic to their requests.