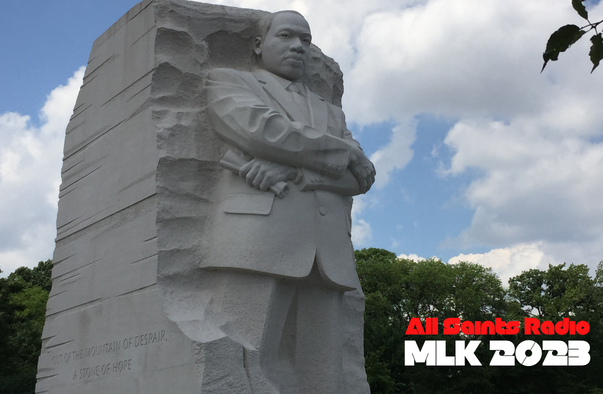 “And Israel saw the Egyptians dead upon the seashore.”-Exodus 14: 30

“The Death of Evil upon the Seashore,”
Sermon Delivered at the Service of Prayer and
Thanksgiving, Cathedral of St. John the Divine
‘7 May ‘956
New York, N.Y.

There is hardly anything more obvious than the fact that evil is present in the
universe. It projects its nagging, prehensile tentacles into every level of human
existence. We may debate over the origin of evil, but only the person victimized
with a superficial optimism will debate over its reality. Evil is with us as a stark,
grim, and colossal reality.

The Bible affirms the reality of evil in glaring terms. It symbolically pictures it
in the work of a serpent which comes to inject a discord into the beautiful, harmonious symphony of life in a garden. It sees it in nagging tares disrupting the
orderly growth of stately wheat. It sees it in a ruthless mob hanging the world’s
most precious character on a cross between two thieves. The Bible is crystal clear
in its perception of evil.

But we need not stop with the glaring examples of the Bible to establish the
reality of evil; we need only to look out into the wide arena of everyday life. We
have seen evil in tragic lust and inordinate selfishness. We have seen it in high
places where men are willing to sacrifice truth on the altars of their self-interest.
We have seen it in imperialistic nations trampling over other nations with the
iron feet of oppression. We have seen it clothed in the garments of calamitous wars which left battlefields painted with blood, filled nations with widows
and orphans, and sent men home physically handicapped and psychologically
wrecked. We have seen evil in all of its tragic dimensions.

So in a sense, the whole history of life is the history of a struggle between good
and evil. There seems to be a tension at the very core of the universe. All the
great religions have seen this tension at the center of life. Hinduism called it a
conflict between illusion and reality; Zoroastrianism looked upon it as a tension
between the god of light and the god of darkness; Platonism called it a conflict
between spirit and matter; traditional Judaism and Christianity called it a conflict between God and Satan.5 Each of these religions recognized that in the midst
of the upward climb of goodness there is the down pull of evil.

The Hebraic Christian tradition is clear, however, in arming that in the long
struggle between good and evil, good eventually emerges as the victor. Evil is
ultimately doomed by the powerful, insurgent forces of good. Good Friday may
occupy the throne for a day, but ultimately it must give way to the triumphant
beat of the drums of Easter. A mythical Satan, through the work of a conniving
serpent, may gain the allegiance of man for a period, but ultimately he must give
way to the magnetic redemptive power of a humble servant on an uplifted cross.
Evil may so shape events that Caesar will occupy a palace and Christ a cross, but
one day that same Christ will rise up and split history into A.D. and B.c., so that
even the life of Caesar must be dated by his name. Biblical religion recognized
long ago what William Cullen Bryant came to see in the modern world: “Truth
crushed to earth will rise again;” and what Carlyle came to see: “No lie can live
forever.”

A graphic example of this truth is found in an incident in the early history of
the Hebrew people. You will remember that at a very early stage in her history
the children of Israel were reduced to the bondage of physical slavery under the gripping yoke of Egyptian rule. Egypt was the symbol of evil in the form of humiliating oppression, ungodly exploitation and crushing domination. The Israelites symbolized goodness, in the form of devotion and dedication to the God of Abraham, Isaac and Jacob. These two forces were in a continual struggle against each other-Egypt struggling to maintain her oppressive yoke and Israel struggling to gain freedom from this yoke. Finally, however, these Israelites, through the providence of God, were able to cross the Red Sea, and thereby get out of the hands of Egyptian rule. The Egyptians, in a desperate attempt to prevent the
Israelites from escaping, had their armies to go in the Red Sea behind them.

But as soon as the Egyptians got into the Red Sea the parted waves swept back upon
them, and the rushing waters of the sea soon drowned all of them. As the Israelites looked back all they could see was here and there a poor drowned body beaten upon the seashore. For the Israelites, this was a great moment. It was the

end of a frightful period in their history.’ It was a joyous daybreak that had come
to end the long night of their captivity.
This story symbolizes something basic about the universe. It symbolizes something much deeper than the drowning of a few men, for no one can rejoice at
the death or the defeat of a human person. This story, at bottom, symbolizes the
death of evil. It was the death of inhuman oppression and ungodly exploitation.
The death of the Egyptians upon the seashore is a glaring symbol of the ultimate doom of evil in its struggle with good. There is something in the very nature
of the universe which is on the side of Israel in its struggle with every Egypt. There
is something in the very nature of the universe which ultimately comes to the aid
of goodness in its perennial struggle with evil. There is something in this universe
which justifies James Russell Lowell in saying:

Truth forever on the scaffold, wrong
forever on the throne
yet that scaffold sways the future
and behind the dim unknown stands God
within the shadow
Keeping watch above His own.

Notice how we have seen the truth of this text revealed in the contemporary
struggle between good, in the form of freedom and justice, and evil, in the form
of oppression and colonialism. Gradually we have seen the forces of freedom and
justice emerge victoriously out of some Red Sea, only to look back and see the
forces of oppression and colonialism dead upon the seashore. There are approximately 2,400,000,000 people in the world today. The vast majority of these people
are found in Africa and Asia. More than 1,400,000,000 of the peoples of the world
are found on these two continents. Fifty years ago most of these people were
dominated politically, exploited economically, segregated and humiliated by
some foreign power. There were 400,000,000 persons in India and Pakistan under
the iron feet of British rule. There were 600,000,000 persons in China under the
gripping yoke of British, Dutch and French rule. There were 1oo,ooo,ooo persons
in Indonesia under the oppressive hands of Dutch rule. There were 200,000,000 persons in Africa dominated and exploited by the British, the Belgium, the French, and the Dutch. The great struggle of the Twentieth Century has been between these exploited masses questing for freedom and the colonial powers seeking to maintain their domination.

What we are seeing now in this struggle is the gradual victory of the forces of
freedom and justice. The Red Sea has opened, and today most of these exploited
masses have won their freedom from the Egypt of colonialism and are now free
to move toward the promised land of economic security and cultural development. As they look back, they clearly see the evils of colonialism and imperialism
dead upon the seashore.

In our own struggle for freedom and justice in this country we have gradually
seen the death of evil. Many years ago the Negro was thrown into the Egypt of
segregation, and his great struggle has been to free himself from the crippling
restrictions and paralyzing effects of this vicious system. For years it looked like
he would never get out of this Egypt. The closed Red Sea always stood before him
with discouraging dimensions. There were always those Pharaohs with hardened
hearts, who, despite the cries of many a Moses, refused to let these people go. But
one day, through a world-shaking decree by the nine justices of the Supreme
Court of America and an awakened moral conscience of many White persons of
goodwill, backed up by the Providence of God, the Red Sea was opened, and the
forces of justice marched through to the other side. As we look back we see segregation caught in the rushing waters of historical necessity. Evil in the form of injustice and exploitation cannot survive. There is a Red Sea in history that ultimately comes to carry the forces of goodness to victory, and that same Red Sea closes in to bring doom and destruction to the forces of evil.

This is our hope. This is the hope and conviction that all men of goodwill live
by. It is at bottom the conviction that all reality hinges on moral foundations and
that the whole cosmic universe has spiritual control.10 It is therefore fitting and
proper that we assemble here, just two years after the Supreme Court’s momentous decision on desegregation, and praise God for His power and the greatness
of His purpose, and pray that we gain the vision and the will to be His co-workers
in this struggle.

Let us not despair. Let us not lose faith in man and certainly not in God. We
must believe that a prejudiced mind can be changed, and that man, by the grace
of God, can be lifted from the valley of hate to the high mountain of love.
Let us remember that as we struggle against Egypt, we must have love, compassion, and understanding goodwill for those against whom we struggle, helping them to realize that as we seek to defeat the evils of Egypt we are not seeking to defeat them but to help them, as well as ourselves.

God has a great plan for this world. His purpose is to achieve a world where all men will live together as brothers, and where every man recognizes the dignity and worth of all human personality. He is seeking at every moment of His existence to lift men from the bondage of some evil Egypt, carrying them through
the wilderness of disciplin.2, and finally to the promised land of personal and social integration. May it not be that this is entirely within the realm of possibility?
I prefer to live by the faith that the kingdoms of this world shall become the
kingdoms of our Lord and His Christ, and He shall reign forever and ever,”