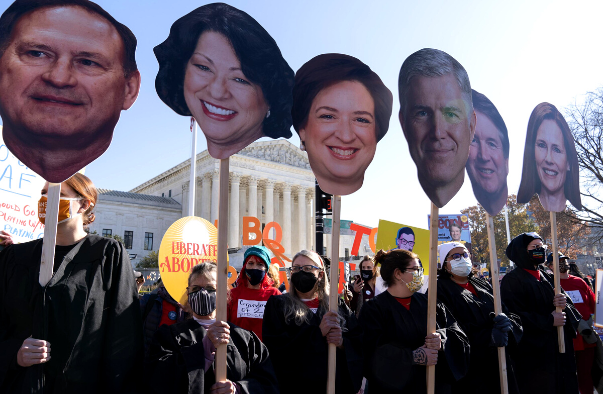 Friday was a day of ecstasy or agony for the many Americans for whom abortion is an important issue. The Supreme Court handed down a decision that overturned Roe v. Wade, the foundational case on which a woman’s right to terminate a pregnancy was established. For some people of faith, it was the triumphant end to a long, hard fight against what they considered a key human rights violation upon the most vulnerable. But not for all of them. Plenty of those who practice a religion mourned the rollback of what they consider a vital legal protection for women, especially the most vulnerable.

According to the Public Religion Research Institute, 43% of Americans who “identify strongly” with their religious identity do not believe Roe v. Wade needed to be overturned. There’s a wide variability within the ranks, however. A majority (56%) of U.S. Catholics believe abortion should be legal, but only 30% of Catholics who attend mass weekly. Similarly, 60% of mainline protestants favor abortion being legal, but only 30% of white evangelical protestants. A slight majority of Muslims and a large majority of Jews also believe abortion should be legal in most cases.

The bulk of the work overturning Roe has been undertaken by Christian organizations, but not all Christian organizations are opposed to abortion. Both sides of the debate rapidly released statements after the decision. CatholicVote President Brian Burch set the tone for many of those in the anti-abortion camp: “Catholics and pro-life advocates across the country celebrate today’s landmark Supreme Court decision as the ‘dawning of a new day in America’—a long-awaited first step toward the full protection of American women and children,” he wrote. “A dark chapter in our nation’s history has finally been closed.” Burch pointed to technological advances that he said have shown that the “humanity of children in the womb has become plain and undeniable.”

For Rev. Jennifer Butler, CEO of Faith in Public Life, the ruling was a warning that social and racial inequities were about to be worsened. “Whatever our opinions on abortion, surely we can agree that jailing a woman or a health care provider for exercising their moral judgment in the moment is wrong. These punitive measures will be aimed disproportionately at Black, Brown, Native and Asian women, LGBTQ people, immigrants and low-income people—compounding the injustice,” she said. “In the aftermath of today’s unjust ruling, we must come together and bear one another’s burdens. We must do everything in our power to ensure that pregnant people who face immediate risk to their health and freedom are respected and protected.”

Others took a more fire and brimstone view about the effect of the ruling. “An ominous cloud still hangs threateningly over our nation,” wrote Phil Ginn, the President of the arch-conservative Southern Evangelical Seminary. “Not only did the Dobbs ruling fail to abate this storm cloud, but rather it perhaps has even given rise to the need for a warning of a tornado, the magnitude of which threatens to strike even at the very core of who we are as Americans.” Ginn went on to warn that “the reality of the present may be even more scary than the world of Roe” that “violence will spread like wildfire” and that “if you dare to speak up for the unborn, you will not be safe even in your home.”

But even among the more evangelical branches, Ginn’s views were an outlier. “Laws are critical, but they cannot change the fact that tomorrow there will still be many women who will face an unplanned pregnancy—afraid, unprepared and unsure of what to do and where to turn,” said one of the the ERLC’s chief campaigners for the anti-abortion cause, Elizabeth Graham. “The Church has a significant opportunity to serve and support these women in crisis and their preborn children in their time of need.”

He Gets Us. The Campaign.