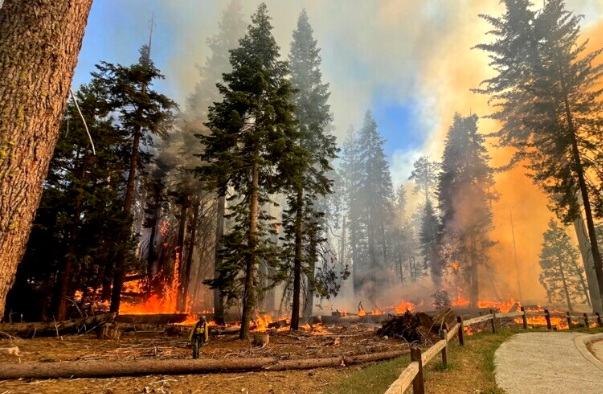 The Washburn Fire was reported in the afternoon of July 7th, near the Washburn Trail in the Mariposa Grove area of Yosemite National Park.   A full initial attack response was dispatched including Yosemite National Park Fire resources and state and local cooperators. California Interagency Incident Management Team 13 assumed command of the full suppression fire on Saturday, July 9.   Of significant importance is preventing or minimizing fire impacting to the Mariposa Grove of Giant Sequoias.  Firefighting resources will continue to arrive over the coming days.

Fuels in the Fire Path: The area in which the fire is burning contains a very heavy accumulation of fuels (trees in various forms and stages) on the ground as well as part of the understory. This old growth habitat is a combination of dead large diameter trees and timber litter on the ground (many feet thick in some cases) in combination with thick growing conifers and shrubs, much of which has been largely untouched for many decades. The more than 500 mature giant sequoias of the Mariposa Grove are adjacent to these fuels and have so far avoided serious damage from the Washburn Fire. Most of these trees are over 2000 years old and have experienced fire many times throughout their lives.

Projected Incident Activity and Suppression Strategy: The combination of continued warm and dry weather conditions along with the heavy accumulation of large fuels is creating the perfect recipe for the very active fire behavior we are seeing. Observers from a distance should expect to see heavy smoke production for the next few days as the fire activity increases each afternoon when the temperatures are at their highest and relative humidity’s are at their lowest, this is expected and not a direct threat to the giant sequoias. And while sections of the fire are not able to be fought head-on by fire crews due to the safety risk for firefighters, much of the rest of the fire is being successfully suppressed, fire lines are being strengthened, unburned fuel in the path of the fire are being burned to “starve the fire” and hot spots are being cooled. Areas which were initially evacuated are being monitored and safeguarded and as soon as it is determined to be safe, these areas will be able to welcome folks back home. Resources from around the country continue to arrive on the incident. It is important to remember that once an area has had fire, there is often a great deal of work required to make the area safe for people again. It should be made clear that there was, in no way, a hesitation in responding to and attacking this fire with all available resources and this is the continued suppression strategy.

Aircraft Incident: On Saturday, July 9th a tree branch was sent into the air from the powerful updraft produced by the fire. As it dropped back to earth, it narrowly missed two firefighting aircraft. Fortunately, there were no injuries and no damage. We are all grateful for the hard work and risks taken by everyone involved with the firefighting effort.

Evacuations & Closures: The Wawona Road (Highway 41) is closed from the South Entrance to Henness Ridge Road.  Yosemite West remains accessible from the northern side of the Wawona road.   The Mariposa Grove are closed until further notice.  A map of the evacuation area and current evacuation levels is available at arcg.is/0Hmuq4.

The Rest of the Park Remains Open: All other areas of Yosemite National Park are open. Use Highways 140 or 120 to enter Yosemite. Reservations are still required; visit www.recreation.gov for reservations. Expect smoky conditions within the park. We appreciate the patience of the public as visitors may experience longer waits at the other entrance stations as the south entrance remains closed.

Weather: . The weather for the coming week will continue to be warm and dry due to a strengthening high pressure system over the area. Expect winds over the fire area to remain light to moderate and mostly terrain driven. Temperatures will reach the low-90s and relative humidity’s will be in the 20-30% range. A full forecast is available at www.weather.gov/hnx.

Smoke: An interactive smoke map at fire.airnow.gov/ allows you to zoom into your area to see the latest smoke conditions.

Aviation / Drone Restrictions:  The Federal Aviation Administration (FAA) has issued Temporary Flight Restriction (TFR) and any private aircraft or drone that violates the TFR could face serious criminal charges. For more information on drones the public can visit theFAA’s website at www.KnowBeforeYouFly.org. “If you fly, we can’t!”