Drought At The Jordan. 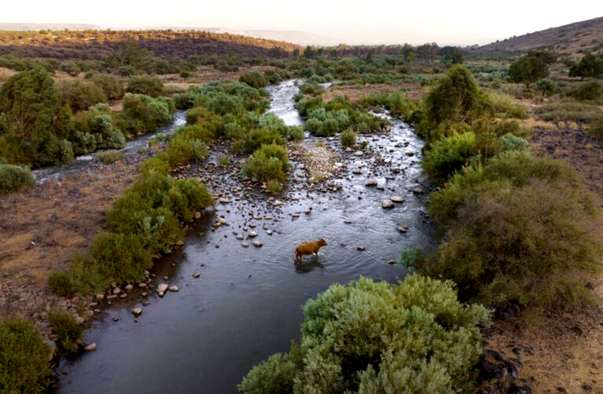 Kristen Burckhartt felt overwhelmed. She needed time to reflect, to let it sink in that she had just briefly soaked her feet in the water where Jesus is said to have been baptized, in the Jordan River.

“It’s very profound,” said the 53-year-old visitor from Indiana. “I have not ever walked where Jesus walked, for one thing.”

Tourists and pilgrims come to the site from near and far, many driven by faith, to follow in Christ’s footsteps, to touch the river’s water, to connect with biblical events.

Symbolically and spiritually, the river is of mighty significance to many. Physically, the Lower Jordan River of today is a lot more meager than mighty.

By the time it reaches the baptismal site, its dwindling water looks sluggish, a dull brownish green shade.

Its decline, due to a confluence of factors, is intertwined with the entanglements of the decades-old Arab-Israeli conflict and rivalry over precious water in a valley where so much is contested. Championing the trans EcoPeace boundary Jordan’s revival without wading into the thicket of the disputes that have fueled its deterioration can be a challenge.

A stretch of the river, for instance, was a hostile frontier between once-warring Israel and Jordan; river water also separates Jordan on its eastern bank from the Israeli-occupied West Bank, seized by Israel in a 1967 war and sought by the Palestinians for a state.

“It’s a victim of the conflict, definitely. It’s a victim of people, because it’s what we did as people to the river, basically, and now adding to all this it’s a victim of climate change,” said Yana Abu Taleb, the Jordanian director of EcoPeace Middle East, which brings together Jordanian, Palestinian and Israeli environmentalists and lobbies for regional collaboration on saving the river. “So it’s a victim in every way.”

EcoPeace has said for years that the Lower Jordan River, which runs south from the Sea of Galilee, is particularly threatened by decades of water diversions for agriculture and domestic use and by pollution. Only a tiny fraction of its historical water flow now reaches its terminus in the Dead Sea, not far south from the baptismal site that Burckhartt visited.

That’s one reason the Dead Sea has been shrinking.

Standing at the Jordanian baptismal site Bethany Beyond the Jordan, Burckhartt, a Presbyterian, said the river’s water felt cold on her skin, offering a respite from the sweltering heat around her. In the jumble of emotions, she grappled with, she could also feel sadness for the river’s dwindling.

“I am sure God above is also sad.”

The Bible says Jesus was baptized in the Jordan River.

The river’s eastern bank, modern-day Jordan, and its western one both house baptismal sites, where rituals of faith unfold, a reflection of the river’s enduring religious, historical and cultural allure.

On the eastern bank, demining of the area where the Jordanian baptismal site now sits began after a 1994 peace treaty between Jordan and Israel.

On the West Bank, a team from The HALO Trust, a British-American charity, has cleared mines from areas housing churches in the vicinity of the Qasr al-Yahud site as recently as 2020. The site itself had opened for the public years earlier after Israel cleared a narrow road to the river, while the churches area remained off-limits and frozen in time for decades.

Work began to clear those mines in 2018, but only after three years of building trust and getting onboard all involved, from Israeli and Palestinian authorities to several Christian denominations that own the churches and lands, said Ronen Shimoni, who was part of the HALO effort.

“Nothing is simple here in the West Bank,” Shimoni said.

It’s against that turbulent backdrop that EcoPeace Middle East has been urging regional collaboration on the Jordan between rivals who have long had every motivation to squeeze as much water as possible out of the river or its tributaries.

“Any fresh water left in the river would have in the past been seen as empowering the enemy. … You take everything that you can,” said Gidon Bromberg, the group’s Israeli director.

“There’s legitimate need for the water. … Water is scarce,” he said. “But the conflict creates an incentive to take everything.”

“Israel, from a historical perspective, has taken about half the water, and Syria and Jordan have taken the other half,” Bromberg said. “The pollution that’s coming into the river is coming from Jordanian, Palestinian and Israeli sides and a little bit also from Syria.”

For Palestinians in the West Bank, the only way to see the Jordan River is to visit the Israeli-run baptismal site there, said Nada Majdalani, EcoPeace’s Palestinian director.

“The Jordan River in the past, for Palestinians, meant livelihoods and economic stability and growth,” she said. Now, she added, it has been reduced to an “ambition of statehood and sovereignty over water resources.”

Bromberg said EcoPeace has been documenting the “lose-lose” nature of the river’s deterioration for all parties.

Politics aside, the strain on some governments to meet water needs complicates calls to add water to the river.

Jordan, for instance, is one of the world’s most water-scarce nations, and its challenges are compounded by a growing population swelled by waves of refugees.

“We are under stress, so we don’t have a surplus to add to the Jordan River and to revive it despite the great importance of this to the Jordanians,” said Khalil Al-Absi, an official with the Jordan Valley Authority.

“We have many beautiful ideas for the Jordan River but there are limitations.”

Climate change threatens to exacerbate such problems. “The impact of the climate change is seriously influencing the water resources,” Al-Absi said.

According to the World Bank, the Middle East and North Africa region faces the greatest expected economic losses from climate-related water scarcity, estimated at 6% to 14% of GDP by 2050.

Advocates, like Bromberg, acknowledge that climate change makes a Jordan revival harder– but argue that restoring the river and its banks offers economic incentives.

“The climate crisis brings home the issue of urgency that rehabilitating the river is perhaps the only way to prevent further instability in the valley,” Bromberg said, “because it can create alternative revenues through tourism.”

For all the river’s challenges, Al-Absi, the Jordanian official, said he remained optimistic. The alternative could be grim.

“If there is no water, people won’t come despite (the presence) of religious sites,” he said. “Water is life. Without water, there is no life.”