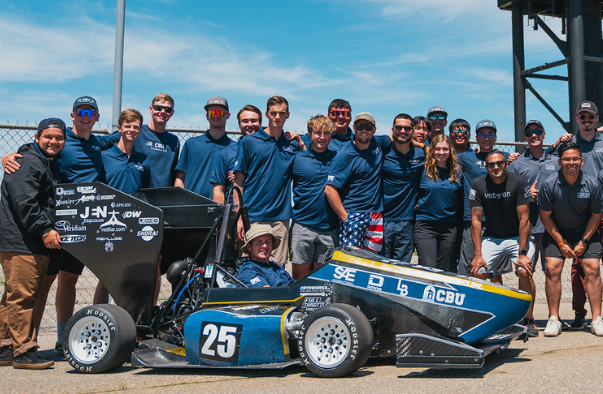 The 2022 competition had 49 universities participating, nearly a 50 percent increase from previous years.

“It was not without challenges,” said Dr. Phil van Haaster, club advisor and dean of the Gordon and Jill Bourns College of Engineering. “Day one inspections revealed some minor faults that required corrections. Even minor issues take time to correct and there are hundreds of moving parts. The team’s efforts lasted past 2 a.m. with a wakeup call at 6 a.m. Their hard work and tenacity paid off.”

The SAE competition included presentations on cost and design as well as dynamic events such as acceleration and autocross. On day four, the internal combustion vehicle was on the track for the endurance event, outlasting and outperforming the competition.

During this year’s competition, Tesla sponsored several first-year EV teams with power cells. CBU was awarded nearly $10,000 worth of Tesla power cells to energize the motor.

Jordan Fabbrini (‘22), outgoing president of the SAE club, said the most memorable part of this experience was seeing the vehicle finish the endurance race.

“The team has worked so hard to get to this point and we finally get to see the team’s efforts pay off,” Fabbrini said.

Every year the team designs the car in the fall semester and manufactures it in the spring semester.

“Once the build is complete, we transition to testing for about a month. The most challenging part is testing,” Fabbrini said. “We had multiple engine failures, which made it very frustrating because we’ve spent so much time designing and building the car. Then you realize there’s still even more work you must do to get the car ready for competition.”

David Everhart, an electrical and computer engineering senior and incoming president of the EV team, said the highlight of the competition was talking with professionals in the field.

“Talking with the design judges and the sponsors who came out to the event made it all worth it,” Everhart said. “We were able to talk knowledgeably to the engineers about things they do on a daily basis.”

The team starts preparing for the next competition upon returning from the previous season’s competition.

Lindsay Monroe, a mechanical engineering junior and incoming president of the internal combustion vehicle, said preparation for the competitions take dedication to the vehicle and to each other.

“As soon as we can, we get the car out on the track and begin testing it to validate our designs,” Monroe said. “It’s so worth it because you will learn invaluable lessons on how to work with an engineering team, meet deadlines and expand your skills in both knowledge and craft.”