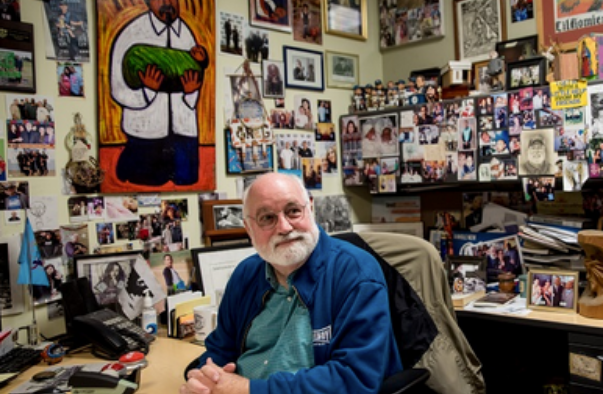 Father Greg Boyle has a long history of standing by those in the margins – sometimes even as bullets were flying past him in the neighborhoods of East Los Angeles.

Fr. Boyle (’77) is a Jesuit who founded Homeboy Industries 30 years ago near his childhood home. The innovative nonprofit provides wrap-around services for former gang members and ex-felons with an 18-month program that has provided life skills, jobs and hope to thousands.

Fr. Boyle started it all as parish priest at Dolores Mission Catholic Church, boldly commandeering resources and raising funds by asking forgiveness, not permission, which often put him at odds with leaders of the church and the Jesuits. Yet he persisted with unapologetic aplomb.

Tired of seeing residents kill each other in gang violence and presiding over their funerals, he rode his bike through the streets late at night, waging peace and brokering truces, sometimes stepping between gunfights. When someone was shot and rushed to the hospital, Fr. Boyle was at their side. To attack the underlying social issues, he tried to keep the “homies” on the payroll and off the streets.

“Everything was sort of an evolution where we would grow into where we are today. However, not once did I say, ‘Here’s what I envision.’ Everything just kind of felt like an outgrowth of where we were,” explains Fr. Boyle, whom the “homies” call “Father G” or “G-Dog.” “As long as you listen to folks, they’ll tell you exactly what they need. I think in 30 years we’ve allowed ourselves to be reached by this population and have received their suggestions. Everything is building on that.”

Countless men and women speak about how Fr. Boyle has personally changed their trajectories and saved their lives through his boundless compassion.

The Homeboy Industries of today is a mature entity, emulated worldwide. It provides services such as tattoo removal, vocational counseling and in-house jobs. Homeboy’s viability now seems secure and not a week seems to go by without Fr. Boyle’s leadership being honored with a prominent award.

He dismisses the accolades, saying this is work he’s been called to do by God and his Jesuit provincial leaders. While that may be true, the personal legend of the iconic priest continues to grow every day.

Fr. Boyle’s story will be indelibly tied to Gonzaga. He came to Spokane in the 1970s, like many of his fellow Jesuit-in-training colleagues of the era, to study philosophy. He’s been a proud Zag since then and the feeling is mutual.

“Those were two of my happiest years, going to Spokane. I loved the people. I loved the Jesuits I lived with. I loved everything about it,” said Fr. Boyle. “I love Gonzaga.”

Fr. Boyle has come back to GU several times and was the University’s 2015 commencement speaker, when he was presented with the prestigious DeSmet Medal. On that day, he said about his ministry:

“It’s the privilege of my life to have worked at Homeboy Industries and, for 30 years, to have accompanied men and women, thousands upon thousands of gang members. The day won’t ever come when I have more courage or I am more noble or I am closer to God than these folks.” – Father Greg Boyle