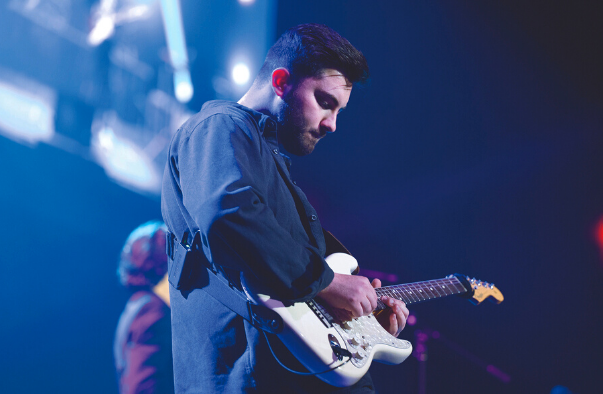 The New Orleans-themed event featured performances by male students, including singing, dancing, spoken word and magic. To close the evening, the male resident advisors (RAs) came together to do a final dance performance.

“WooFest is an event that CBU has put on for many years,” said Brianna Collingwood, residence director (RD) of the Cottages. “Essentially it’s a variety show where guys come to ‘woo’ the ladies. Really it is just a fun night to have students dress up and come enjoy.”

WooFest began in 2009 on campus. In 2017, it moved to the Fox Theater in downtown Riverside. This year, the event occurred in the Events Center to accommodate a larger audience and make it more accessible.

“It is super exciting to utilize the Events Center to serve our students on campus,” Collingwood said. “In past years, we’ve done it at the Fox Theater, which we’ve outgrown, and we are really passionate about including all students.”

Additionally, the event was open to all traditional undergraduate students this year rather than only residential students.

“Coming off of a year where there has been a lot of isolation and no events, I think getting the opportunity to build community among all students is something that sets this year apart,” Collingwood said.

Collingwood said CBU Resident Directors and RAs helped in the preparation, and Residence Life partnered with multiple departments across campus including ASCBU, Community Life, and Conferences and Events to bring the event to life.

“It was cool to see the RAs put in a lot of effort to make this an amazing show,” said Steve Jussenhoven, RD of University Place Men. “They put a lot of work into the decorations and the little details we hope residents appreciate.”

Amanda Salas, graphic design and visual experience sophomore, attended WooFest for the first time this year. She said she enjoyed the community-building aspect of the event, especially for students who feel less connected to the school because of COVID.

“I think it is fun,” Salas said. “It definitely makes me feel a little more involved on campus. It’s just great to be a part of it.”

Collingwood said she has enjoyed reintroducing a CBU tradition to a new wave of students.

“It has been cool to bring back the excitement and what WooFest is,” Collingwood said.

Jussenhoven said he hopes students enjoyed the event and the aspects that made this year’s WooFest unique.

“It really is just a special event for people to come, dress up to the nines, having a great time with their friends,” Jussenhoven said. “Everyone gets to watch some really cool shows and really cool acts and a lot of great talent. Hopefully it is a night that everyone is going to remember.”