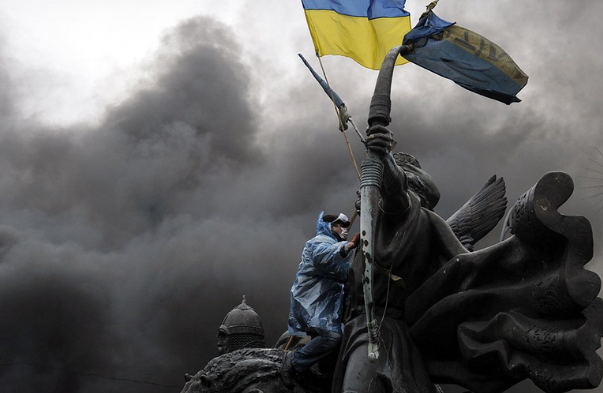 As Russia invaded Ukraine today, pressing near even to the capital of Kyiv, a Baptist home was destroyed and a seminary shaken by nearby blasts. Local sources told CT, however, that no churches or Christian buildings had been attacked so far.

President Vladimir Putin announced his forces were targeting only military installations. He also asserted that Ukraine does not truly exist as a nation.

Igor Bandura, vice president of the Baptist Union, the largest Protestant body in Ukraine, heard about collateral damage to the home of a Baptist in Donetsk during a Zoom call with his 25 regional superintendents.

Minus one. On the front lines of the eastern Donbas region, the Baptist leader from the occupied territory of Luhansk was unable to join.

But from the town of Chasov Yor on the front lines in neighboring Donetsk—in an area then still under Ukrainian government control—Bandura learned the local assessment.

“People don’t want to be under Russian control,” he was told. “But they feel helpless. What can ordinary people do?”

This was the message put out by the Ukrainian Council of Churches and Religious Organizations (UCCRO), a day after its appeal to Putin went unanswered.

“We urge you to remain calm, not to give in to panic, and to comply with the orders of the Ukrainian state and military authorities,” stated the UCCRO. “The truth and the international community are on the Ukrainian side. We believe that good will prevail, with God’s help.”

President Volodymyr Zelensky announced by video shortly after midnight that 137 Ukrainians died during the invasion’s first day. “They are killing people and transforming peaceful cities into military targets,” he said, according to The New York Times. “That’s villainous and will never be forgiven.”

Valentin Siniy, president of Tavriski Christian Institute (TCI) in Kherson, about 50 miles from Crimea, had to evacuate his seminary along with a team of Bible translators as Russian helicopters attacked local targets.

“The majority of old pastors of the churches stayed in the cities. Youth leaders started evacuating young people,” he told CT. “We managed to purchase a van with 20 seats in order to evacuate people. About 30 people are in a safe place now, in western Ukraine. There are about 40 more people driving west [in] vehicles that are in bad condition.”

One thought on “Russia Invades Ukraine.”